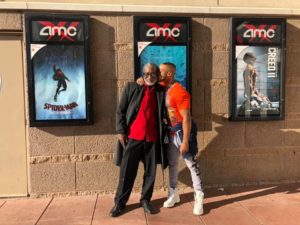 “DC is back baby”! Those were the words I obnoxiously yelled at the beginning credits of the new Aquaman movie. The audience laughed after my remark then proceeded to focus their senses on the highly anticipated underwater superhero epic. Aquaman is the latest installment of the DCEU .

We left off at the not well received Justice League movie. As a die hard DC comics fan, as much as I liked Justice League, it just didn’t nail it. With the continuous success of the Marvel Cinematic Universe, along with the endless debates on which studio produces better movies, DC needed a win. After seeing Aquaman, it’s safe to say we are back in the game! The movie has it all. Great story-telling, character development, breath taking visuals and eye popping action sequences. This was my first underwater movie experience and it was unforgettable. With the length of 2 hours & 22 minutes, the movie takes it’s time with providing the audience with a complete origin story on the “King Of Atlantis”. The audience and I were able to connect with each character. Just when the movie began to slow down, it rapidly got into action. The visuals were out standing, at times it reminded me of Avatar. The colors were bright and vibrant, the production team spared no expense on detail. The audience cheered for the highlight of the movie, the protagonist donning the iconic but often made fun of Aquaman suit. If anyone can pull off a tight fitting gold and green fish suit, Jason Momoa can! Jason was perfect as our hero, he was charming, charismatic and strong. Aquaman is a great date movie! Maybe a little lengthy for children under 12 with a short attention span. The fight scenes were brutal, may not be for anyone who isn’t into witnessing a few ass kickings from time to time. Go see this badass underwater epic!