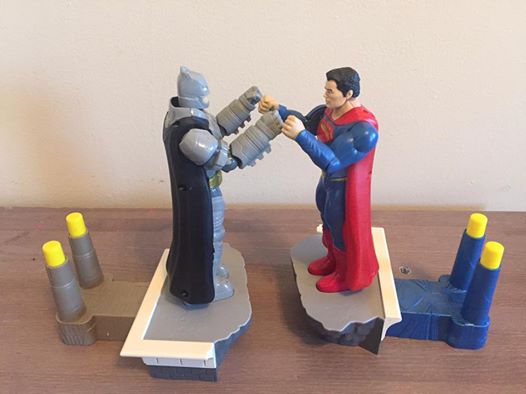 It’s been 2 weeks post Batman v. Superman Dawn of Justice, the smoke from all of the heated debates between fans and critics seem to have cleared a bit. I was able to catch a 2nd showing of BvsS this past weekend and I thoroughly enjoyed the movie. I decided to write a spoiler review on the movie and hopefully can help non comic book fans have a better understanding of the movie.

The best way for me to dissect this film is to break it down in 6 key elements that helped create this great comic book movie.

The opening scene is a flash back of the Wayne funeral, we receive a rehashing on why Bruce became the vigilante we know him to be today. It may get old for some but in this film we are getting a introduction of a new Batman different from the Nolan movies. The scene where the bats help young Bruce levitate, was both metaphorical and a tease that the producers will make the character more of a supernatural figure. The next scene revisited the action sequence involving Zod and the new Superman taken from the 2013 Man of Steel, this time is was from the perspective of Bruce Wayne. If you saw Man of Steel there were a lot of collateral damage, this movie went in depth on the magnitude of the destruction, civilians paid dearly with their lives. You see death of innocent people through Bruce Wayne’s eyes played by Ben Affleck.  Bruce rushes through the streets of Gotham in  his vehicle dodging fallen debris caused by the world engine. Bruce Wayne believes he can get to the employees in his financial building fast enough to save them. Bruce is too late, he watches helplessly as the building collapses in a way similar to the events that occurred in  9/11. Ben is completely believable in his expression of hurt transformed into anger caused by senseless killings as a result of Zod and Superman’s fight. Batman/Bruce Wayne still suffers from depression from the death of his parents, and also a death of a sidekick, Robin. The scene where he gazes on a statue of the old Robin costume with Joker writing over it. In the comics Joker kills Jason Todd‘s version of Batman’s protege’, this sends Batman over. Due to many tragic moments, this Batman is jaded and has little to no rules, he isn’t afraid to kill if necessary.  Only until the end of the movie where Superman sacrifices himself does Batman return back to the “hero” that we recognize. I like that we were provided with a Detective Batman : finding the kryptonite. A handy Batman: forging weapons out of kryptonite. A ninja Batman:  demonstrating uncanny fighting skills and ghost like reflexes.

2 years passed the world is divided, some believe Superman is hero and some believe he is a monster, this debate carries out throughout the movie. Zack Synder presents a Superman different than previous incarnations where the world widely accepted him with open arms. Realistically if a powerful being ever made an appearance most of the world would be skeptical to his true motives. The questions are raised Why is he doing this? Is this political? What does he have to gain? Of course the government wants to bring him in and control him. Clark confides in the 2 most important women in his life Lois Lane and Martha Kent, they both believe in him but it’s not enough, he still doubts himself.

In just about all live action incarnations of the character, Lex have been depicted as a silly villian motivated by jealously of Superman because of his power and the fact that he hated how Supes had a way of thwarting his evil plans. Luthor is played by Jesse Eisenberg. Initially Jesse presents the character as a spoiled rich brat with no real motive on why he is a villain, as the movie progresses you see the layers of the character that makes him the most intriguing Lex to date. Lex has issues with God, he believes God cannot be all good. If God was good God would had not let his father abused him as a child. Superman resembles God, Lex hates that. This Lex has close ties with the government, he supplies weapons for them. The government did not hesitate to provide him with access to the ship and General Zod’s body for testing. This Lex knows everything there is to know about Superman: his alter ego, where he lives, his mother, this explains why it was so easy for Lex to capture Martha as bait in order to have superman fight Batman. Lex had no limitations on his knowledge of the heroes, he knows what would set off Batman/ Bruce, sending letters with writing saying ” you let your family die”. Lex devised the fool proof plan to pin Batman and Superman together, the only person that was smart enough to figure the grand scheme was Lois Lane. The titans were too distracted to realize they were toys in Lex’s game. The real twist in the movie is featured at the end, Lex and Batman have words in prison, after Batman leaves Lex mentioned of someone “him”, which leads us to believe that Lex is a puppet too. Who could it be? My guess is darksied.

Wonder woman makes her debut on the big screen, she was amazing. Gal Gadot plays Diana Prince/Wonder Woman, Gal provides us as audiences with a blend of sexy, mysteriousness and strength. She has been away from action for a long time, she hides among regular society. Only recently does she come out, she is in search for a artifact, a picture revealing her true identity. Of course Lex has it along with files of other “meta humans” like her who will eventually form the Justice League. Wonder Woman is witty and some ways smarter than Bruce. She got the upper hand stealing data from Lex before Bruce could retrieve it. Wonder woman makes a epic return to battle against doomsday in true heroine fashion. Her fighting skills rivaled that of Superman and Batman combined, leaving audiences begging for more.

For non-comic book readers the dream sequences could have been confusing. The dreams were a fresh storytelling tool to set the movie up for future events. Bruce is in a baron wasteland, he leads a anti Superman resistance team. Bruce attempts to fight off Superman’s henchmen and flying demons, he is unsuccessful. As a result Batman is captured, an evil superman flies down, killing any survivors of the resistance and even kills Batman after he figures out that he is Bruce Wayne.

The second dream features the flash played by Ezra Miller, he tries to deliver Bruce a message; “Bruce, listen to me. You were right about him, find Lois, Lois Lane”! Based on the dreams I draw the conclusion that in the near future Superman goes rogue destroys the planet. Why? I’m sure it will be explained in 2017’s Justice League movie.

Many viewers left the theater depressed because our beloved Superman was killed. One of the best selling comics in history is the Death of Superman. It is the inevitable for Superman to die in order for the world to truly appreciate who he was and what he stood for.

These 6 elements combined created this amazing movie that has been the most controversial comic book film to date. We witnessed Batman and Superman interact together on the same screen. We also got the chance witness other iconic heroes and villains make there mark in cinematic history.

I highly recommend everyone who haven’t read the following graphic novels so you can fully appreciate the direction of this film: Dark Knight Returns and Death of Superman.